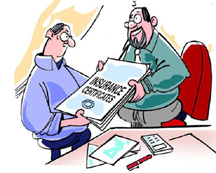 The Union government should withdraw the Insurance Bill that envisaged enhancement of foreign direct investment in the insurance sector from 26 per cent to 49 per cent, the All India Insurance Corporation Employees Association (AIIEA) has demanded.

In another resolution, the conference called for regularisation of services of all part-time employees of public sector general insurance companies and revival of appointment on compassionate grounds.

A resolution demanding recognition for the association and provision of joint bargaining right and single representation for AIIEA in the LIC Board was also made in the conference.

The association also demanded protection of rights of scheduled caste and tribe employees in insurance sector. It said the bill to ensure for 33 per cent reservation for women in the legislatures should be passed by the Parliament without further delay;

It also wanted Sethusamudram ship channel project (SSCP), which was aimed at boosting economic growth in south Tamil Nadu, should be implemented.