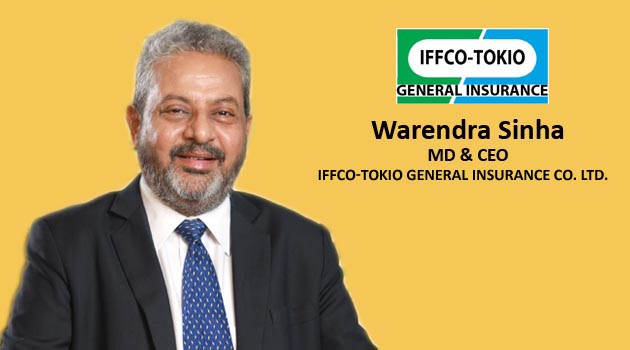 Interviews
December 26, 2018January 8, 2019 admin 1413 Views 0 Comments IFFCO-TOKIO General Insurance, Warendra Sinha
Warendra Sinha joined IFFCO – Tokio General Insurance Co. Ltd  as Managing Director and CEO on 28th of March, 2017. Prior to that, he was Director cum General Manager of National Insurance at Kolkata. Mr. Sinha also served GIC Re, Mumbai as General Manager and headed GIC Housing Finance Limited, Mumbai as Managing Director & CEO. He has also worked abroad at KENINDIA Assurance Company Ltd., Nairobi, Kenya. His illustrious career began way back in 1982 when he joined The Oriental Insurance Co.Ltd as a direct recruit officer  and where he worked in different capacities such as Branch Manager, Divisional Manager and Chief Regional Manager, in all parts of the country. An ace table tennis player in his school and college days, Warendra Sinha also did well in academics. After finishing his schooling from St.Michael’s High School ,Patna, he went on to graduate in History from Hansraj College, Delhi University. He received his post graduate degree in Sociology from JNU, New Delhi. His astute and dynamic leadership has taken IFFCO Tokio to new heights and ushered in perceptible changes in the work culture of his organization. Recently Dr. Abhijit. K. Chattoraj, had a candid talk with Mr Warendra Sinha to know about future plans and initiatives of his company

Insurance Times:- How was the initial feeling at the time of taking over the reins of IFFCO Tokio General Insurance Co. Ltd. as Managing Director and CEO? I mean the transition from public sector culture to private sector…

There are differences working in the private and public sector organisations as they are governed by different principles. For example, in the public sector one is accountable to the government but in the private sector, promoters play an important role in shaping the future of the company and are more involved with results and decisions at the management level. There are cultural differences as well, considering that private sector companies have more freedom to operate, compared to the Govt. sector, where you are also governed by various governmental agencies. Having said that, the domain knowledge that I gained while working with different public sector organisations helped me a lot in making this transition smoothly.

Insurance Times:-  The last financial year result augurs well for IFFCO Tokio. Your total business crossed the 5000 crore mark for the first time and your market share also improved drastically. What contributed to this growth ?

Year, before last was a landmark year for us, as we crossed the Rs. 5,000 crore mark for the first time. The main drivers of this growth were motor, health and crop insurance. We have launched several initiatives on the technology front as well to further strengthen our retail line of business. Our long term goal is to give seamless claims experience to our customers. We hope to end this year on a much better topline number.

Insurance Times: –   There is yawning protection gap in all major lines of business in India despite prolific growth in insurance business. Most lines of business remain grossly unpenetrated. Where have things gone wrong in India?

Insurance penetration has been fairly poor in the country due to low awareness coupled with various distribution challenges. One of the main challenges is the remuneration paid to the agents servicing in the remote areas, as it is not enough to meet their expenses incurred while selling the insurance policy. This is the reason why many people are not eager to become full time agents as commission paid to them is low compared to the effort they put in while selling the insurance policy. Over the years several new age distribution channels such as common service centres, insurance marketing firms and open architecture model in bancassurance have come up to bridge the gap but a lot still remains to be done. The fact is when it comes to selling insurance, a customer still prefers personal interaction with the customer. There is a need to strengthen the agency force. In India, we still have to sell insurance, since customers do not buy readily. Insurance awareness has to increase in our country for higher penetration.

Insurance Times –What would drive the insurance market of India in days to come? Is the industry prepared for these changes ?

Technology will play an important role in driving the growth of the industry. Today, the industry has begun utililsing tools like Artificial Intelligence, Robotic Automation, Machine Learning, Blockchain, etc. At IFFCO Tokio, we have Artificial Intelligence (AI) powered chat bots to download and renew the motor insurance policy. We have also developed the QCS (Quick Claim Settlement) app for motor and health insurance. The QCS app helps in automated assessment of claims resulting in faster settlement of claims in just three steps. We have also launched a hospital portal to reduce TAT (Turn Around Time) for pre-authorisation approval time. With the integration of the hospital portal to our systems, we are able to update the pre authorization request on real time status. Digital and online processes will be the order of the day and anyone not keeping pace with this trend, shall lag behind.

Insurance Times – Your company has JV with a Japanese company. To what extent, this collaboration works in your favour in terms of technology transfer or other expertise…

The joint venture with Tokio Marine Group has reaped us many benefits in terms of access to global expertise in underwriting and product development. The joint venture has also helped us in terms of access to global clients, specialised training and technology. Most importantly, we both share a common vision that the customer shall always come first – while IFFCO Tokio says “Muskurate Raho”, Tokio Marine subscribes “To be a good Company”.

Joining as MD & CEO of IFFCO Tokio General Insurance, a private sector general insurer, though I had been shortlisted to become Chairman & Managing Director of a large PSU general insurer. It was a tough choice to make at that time.

Insurance Times- Any moment that you cherish the most in your life..

Yes, my one to one meeting with Late Dhirubhai Ambani in the year 1985, when I was very young. Reliance Industries was holding its AGM in an open Maidan at Mumbai. My company, Oriental Insurance was covering the event and had issued a special contingency policy which was not popular at that time. My then Regional in-charge had some important engagements and my Divisional Manager was unwell, as a result I was asked to go to him and explain the coverage.  I plucked up my courage and went to meet the great man. Seeing me, the great man quipped, “you seem very young, would you be able to handle it?” and then asked whether the event was adequately covered. I promptly explained all the perils and maintained that the event was fully covered. That fleeting meeting is still fresh and left an indelible remembrance in my mind for ever – his presence was towering even then.

Insurance Times – You played Table Tennis with lots of zeal in your young days. Are you still passionate about sports?

Yes, I was very passionate about table tennis during my school and college days and used to play well as the School, College and University Captain. In 1978, in the Inter –Hostel championship at Delhi University, we at Hansraj defeated Ramjas College in the Finals, in the presence of a 500 strong gathering. I was given Rs. 500 as prize money which was a big amount at that time. Now-a-days I hardly get time to play, though I follow cricket, tennis and golf on television.

None at all. The Lord has been very kind. Thank you.