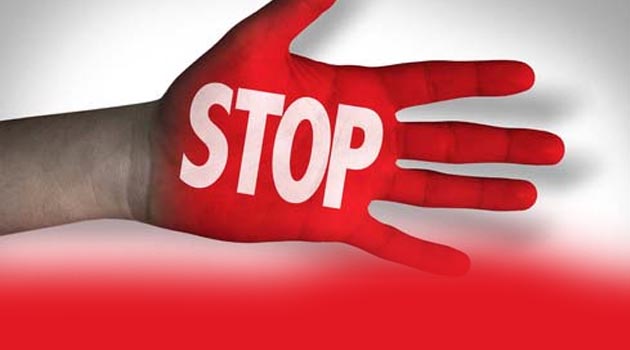 Insurance Articles
August 29, 2018 admin 642 Views 0 Comments Cyberbullying solutions, Identifying incidents of cyberbullying, Impacts of cyberbullying, Meaning of Cyberbullying, Methods behind cyberbullying, Survey findings.
Abstract Today many people take out insurance policies. Because insurance policies and plans provide the comprehensive life insurance coverage, as well as the extra edge of financial support in their future education and careers. And they do this in the hope that they are securing their future by preparing for the worst. Parents always wish to make their child well educated, aim for his/her successful career in life thus fulfilling all his/ her dreams. And they believe it will maximize their children’s potential life. Today has had a significant effect on children and teenagers. Children in the current generation are enamored with technology. Due to the growth of technology updates, it’s needed to insure and secure their life from Cyber bullying. In this article we are going to know about the growth of technology updates and its impact among the children’s and teenagers. Some of the issues and its impact are discussed in this article. Keywords : Meaning of Cyberbullying, Methods behind cyberbullying, Impacts of cyberbullying, Identifying incidents of cyberbullying, Cyberbullying solutions, Survey findings.

Today, people all over the world take out insurance policies to prepare for their future. Because, the insurance policies and plans provide the comprehensive life insurance coverage, as well as the extra edge of financial support in their future education and careers. People do this in the hope that they are securing their future by preparing for the worst. Parents always wish to make their child well educated, aim for his/her successful career in life thus fulfilling all his / her dreams. And they believe providing insurance will maximize their children’s potential life. Most of the parents offering new technology devices for their children’s to improve their knowledge and to overcome from competitive world. People all over the world have the capability to communicate with each other with just a click of a button. Same as children used to actually talk to their friends. Those hours spent on the family princess phone or hanging out with pals in the neighborhood after school vanished long ago. But now, even chatting on cellphones or via e-mail is old. For today’s children and teenagers, the give and take of friendship seems to be conducted increasingly in the abbreviated snatches of cellphone texts and instant messages, or through the very public forum of Facebook walls and MySpace bulletins. To date, much of the concern over all this use of technology has been focused on the implications for children’s and teenager’s intellectual development. Worry about the social impacts has centered on the darker side of online interactions, like cyberbullying or texting sexually explicit messages.

The brand of bullying called Cyberbullying is relatively new and has become more prevalent over the last few years with the rise of social networks being the choice communication vehicle for most children and teenagers. Cyberbullying occurs when individuals “the Internet and electronic communication technologies to transmit hostile messages and images”. In the current scenario, Cyberbullying is considered harassment. Pressure or mean comments that focus on things like a person’s gender, religion, sexual orientation, race, or physical differences fall into this category. Cyberbullying often leads to real-life, physical conflicts as well as feelings of depression, hopelessness and loss. Whether it’s done in person or online, this type of meanness counts as discrimination and is against the law in many states.

Methods behind the Cyberbullying

The following methods are in behind the cyberbullying.

Cyberbullying can happen to anyone and anyone can become a victim of cyberbullying, many children and teenagers become victims due to their desire use modern technology and their failure to use safe internet practices. Victims may or may not be the target. Children and teenagers are not the only people being targeted. Educators and school staff are also being targeted electronically.  According to survey the children are highly affected comparing to others. Global research has identified that girls are more likely to report that they have been victims of cyber bullying than boys, potentially because they engage in a higher level of technology-assisted social communication such as using SMS, emailing and social networking.

The following signs and changes in behaviour could indicate that being cyber bullied. Symptoms Some of the signs above may also be indicators of more general social issues, specific mental health issues, or may even reflect developmentally appropriate behaviours for children and teens as they seek to establish their identity. Exploring any significant concerns with students and parents is an important first step toward identifying issues and developing strategies to overcome them.

Survey Findings based on Cyberbullying

According to the survey conducted by Microsoft noted that cyberbullying was on the rise among Indian children and teenagers in the age bracket of 8 to 17. Over half (53 percent) of children in India have been bullied online says the survey. The report puts India third on the list behind China (70 percent) and Singapore (58 percent), stressing on the need to increase education about online behavior in India amongst all stakeholders. 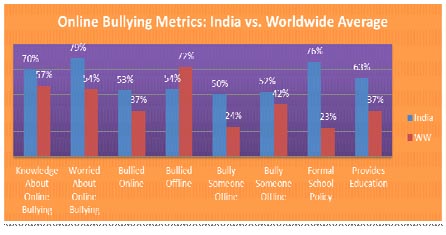 The survey was conducted in 25 countries between January 11 and February 19 2012, among more than 7,600 children of ages 8 to 17, and focused on how kids are treating one another online and whether parents are addressing online behaviors. The children were asked whether somebody was unfriendly or mean towards them on the Internet or if other children had made fun or teased them. The survey also noted that unlike offline bullying where girls were more likely to be bullied, the online playground seems to be free for all as both genders are equally likely to face cyber bullying. The Indian youth also seem to be aware young netizens as 8 out of 10 boys and nearly the same number of girls acknowledge cyber bullying. The US security software company conducted a survey in seven Indian metros with 750 parents and 757 teenagers and released on 2012, found 67% of the kids had a bad experience after finding new friends online. As many as 70% of the teenagers know they shouldn’t share their home address, but 40% still do, the survey found. And 74% know they shouldn’t share their mobile-phone number, but 30% did it nevertheless. It’s not as if parents are not aware of this because 28% said their children might have put up their phone number on the world’s largest social-networking website. Facebook, Reports of a cyberbullying explosion over the past few years because of increasing use of mobile devices have been greatly exaggerated, According to the website KidsHealth.com survey, in which they asked 1,229 boys and girls to answer some questions about bullying. Nearly half of them said they had been bullied before. Some said it was happening every day. Others said it only happened once in a while. Globally, the survey also revealed that children want to talk to parents about the issue, but only 29 percent of kids say their parents have talked to them about protecting themselves online. Further, according to the results, there is not one common step taken by parents to address the problem, with only 17 percent having communicated a clear set of rules for negative online behaviors. In Delhi, there was a recent incident of Facebook bullying, which spilled over into the real world as well. A 13-year-old boy was infatuated with a girl in his class. When the girl befriended him, he was ecstatic. A couple of weeks later, he went out of town with his parents on a weekend trip. When he came back to school the next day, many people in school made fun of him and called him gay. He quickly found out that someone had accessed his Facebook account, and changed his interests to gay men. He changed these settings immediately, but continued to be teased, and went into a serious depression for a while, his parents said. “Children don’t always understand that there are long-term consequences to saying things online. Most of their posts will not get a reaction except for from their friends. So they start to think that they’re not really public. And then strangers might contact them, or just get their number from a public post,” said Chennai-based child psychologist Lakshmi Rajaram. “That’s why parents need to monitor what their kids are doing.” A new poll conducted by global research company Ipsos finds that more than three out of ten parents (32%) in India say their children have been victim of cyberbullying. The findings also disclosed that 45 percent of Indian parents believed a child in their community was being cyberbullied, while a majority (53%) of parents online in India is aware of the issue. “The findings are quite surprising, which revealed that the frequency of cyberbullying in India was higher than that of western nations including the US (15% of children), UK (11% of children) and France (5% of children). Prior to this survey, there has been little evidence to suggest cyberbullying is a major issue in the country. This is in contrast to the US, where the phenomenon has been linked to several teen suicides,” said Biswarup Banerjee, Head – Marketing Communications, Ipsos in India. Conclusion Everyone has a role to play in empowering children to stay safe while they enjoy these new technologies, just as it is everyone’s responsibility to keep children safe in the non-digital world. Government, industry, parents, schools, the public and third sectors , we all have an important part to play, and we must work together to achieve our goals. But this isn’t just about a top-down approach, children and young people need to be empowered to keep themselves safe. It also doesn’t mean we close down our children’s digital opportunities in order to eliminate risk. Though technology has brought new opportunities for students and teenagers, it is important that everyone learn to use it responsibly. Instead, we need to listen to, empower and support our young people to understand and manage risks, and make the digital world safer.